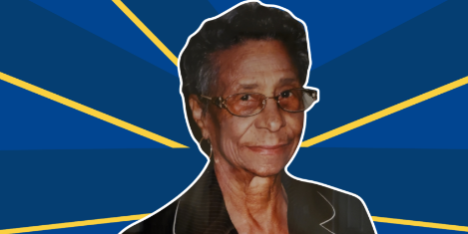 Elizabeth “Liz” Jackson was born Jan 18, 1918, long before the UAW’s founding in 1935. Yet once she joined the union, it seemed to be a role crafted especially for her.

She earned a berth in history books as a leader for the labor movement, African Americans and for women. She was also a woman, who up to the last seven years, marched in high heels during Detroit Labor Day parades, leaving spectators in awe and cheering her on.

A MENTOR AND A FRIEND

“I am one of the many who called her Mama Liz,” said UAW President Rory L. Gamble. “She was a true leader and someone who readily shared her knowledge with everyone around her. She believed in empowerment and she had a huge vision that encompassed the entire community. Not just what labor needed. Not just what Detroit needed, but what would bring all of us together everywhere.”

“She inspired a lot of women to go further in leadership at the UAW,” said Peaches Anderson, one of Jackson’s ‘UAW daughters,’ a close friend and president of the Local 600 Retiree Chapter. “She was humble and a powerhouse at the same time. She never stopped being committed to the union or Detroit. She never stopped showing her concern about the labor movement or what was happening on all levels of American politics. She definitely kept us all on our toes.”

Jackson was hired at the Ford Motor Company’s River Rouge Aluminum Foundry March 11, 1943. She joined Local 600 and quickly found others looking to her for leadership. Over the next 20 years, she served in numerous elected local union positions.

By 1957, Liz Jackson joined other leaders in forming the Trade Union Leaders Council (TULC). The TULC became a nationally recognized organization credited with advancing black political development within the UAW, the labor movement and the African American community.

COMMITMENT TO UNION AND COMMUNITY

In August 1966, UAW President Walter P. Reuther appointed Jackson to serve as an International representative assigned to the union’s National Ford Department. She was instrumental in negotiating national Ford contracts.

After retiring in 1983, she remained active mentoring future leaders and engaging in politics on all levels. She was active in UAW Region 1A events and doted on her beloved Local 600 active and retired friends.

In 2012, Jackson attended the Democratic National Convention as part of the Michigan delegation where she cast her vote to nominate President Barack Obama to a second term. Jackson was said to describe that event as a moment in her life that she would always remember.

On March 7, 2013, Rep. Gary Peters recognized Jackson in the Michigan House of Representatives for her lifelong achievements and contributions to the labor movement.

“Her dedication to the greater Detroit region and her brothers and sisters in organized labor have undoubtedly been an inspiration for many that have sought to serve their communities,” Rep. Peters read in the resolution he presented as a representative from Michigan’s 9th Congressional District. “Liz has made such a profound impact on the community she calls home and I wish her continued success in all of her future endeavors,” Peters, now a U.S. senator, said at the time.

His remarks were a moving tribute to Jackson shortly after her 95th birthday.

“Everyone knew who she was and what she had accomplished,” said UAW Region 1A Director Chuck Browning. “Even members who did not know her personally called her Mama Liz, because they knew about her accomplishments and saw her come around, still involved and still loving her union sisters and brothers.”

“She left us a great gift,” President Gamble said. “Elizabeth Liz Jackson will never be forgotten. Her monumental legacy will forever be a part of what makes the UAW great.”